Today, Tim and I celebrate our 30th Wedding Anniversary. 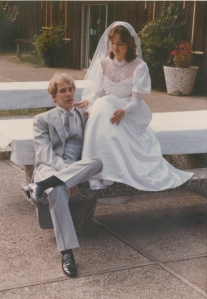 Our favorite wedding photo. A quiet moment, just us two.

I am not surprised we made 30 years. However, it does surprise me that we made it past the first date, and the second…this is my side of the story. If you want his side, he’ll tell you over on his blog today The Blind Date – His Side. Interesting how we each recall these events. 😉

This is what I looked like when we met.

This is what Tim looked like when we met.

September 1980
Kelly, a coworker came into the camera store and asked how I felt about blind dates.

“I don’t.” My response was simple. It was only a week after I started the job. I worked with this person for a total of thirteen hours. Not long enough to trust her judgment to set me up on a date.

“But, they’ll be here when we close in fifteen minutes,” Kelly protested my refusal.

I didn’t really hear too much at that point, something about a guy named Greg and his friend, Tim. In fifteen minutes? Good grief!

Then they walked in. Early. Great. I was really annoyed and made my way over to the counter. I planned to politely apologize for my presumptuous coworker.

Tim was friendly, nice and funny. He was roped into this as well, something about Greg and begging. We laughed and decided to bail Greg out by being escorts for the date.

We saw a Charles Bronson movie, Borderline  – enough said. Not a stellar start, we said our goodbyes and that was that.

A few weeks later, Tim showed up at my work and invited me to an Air Supply concert. Somehow, Kelly managed to rope some poor soul into going along. I thought she was his friend, he thought she was my friend. So it was, the four of us, as well as about couple dozen or so of his other friends. Nice intimate evening.

Then he asked me out again, but I was busy that night, told him I was going out with someone else. He thought I meant “going out” as regular dating boyfriend, I didn’t correct him and left it at that.

A few months passed and Terry, another coworker, was continually inviting me to join him and his friends on Saturday nights. I kept making excuses. I really didn’t have time for it, and I am not a crowd or party person.

Then one afternoon, I relented and accepted Terry’s invitation. He told me the party started at 9 pm on South Cow Creek Rd. I arrived on time. The road was more of a dirt path with large cobbles and potholes. I carefully wound my way in, swearing under my breath the whole way. My 1965 Triumph Spitfire had all of 4” of clearance and this road needed a 4×4. To top it off, some guy was right behind me with lights shining in my mirrors.

I arrived at the house and Terry was not there. Nobody knew me. All the gals looked at me like I was some kind of party crasher – cliquey things. Then someone said, “Hi, Mary.” It was the blind date guy, Tim and his brother, Pete. I didn’t know anyone else, so Tim and I talked while I waited for Terry to show up. The cliquey girls didn’t like us talking so much and they really hated it when we danced.

About the time the guys cleared the furniture and were wrestling in the living room. Terry finally showed up. Well over two hours late. Terry thought he would be cute and challenge me to “wrestle.”

Bad plan. I was peeved. He had no clue. He was flirting. I was not. His ‘plan’ was to let me win. Bad plan, in no time he had to fight back, I made sure of it. Then I mopped the floor with him. I wasn’t playing. He got the message.

Then the harassing began, even without the beer the guys would have teased him to no end about being beat by a girl. They were merciless. “You wrestle her,” Terry answered back.

“No way,” they said. Then one voice broke through the crowd, “I will.”

It was Tim, the blind date guy. I did not know he was a competitive wrestler. Crap, I was just a scrappy girl with no training who stood a fair chance to kick the butt of the average guy out of sheer determination an orneriness. With Tim, I was clearly in over my head. I gave it a good go. He did not embarrass me too badly, but he easily kicked my butt.

He showed up on time, was fun to talk to, great smile, quite the flirt, he could and would hold his own with a strong woman. Now this was someone I wanted to know better. 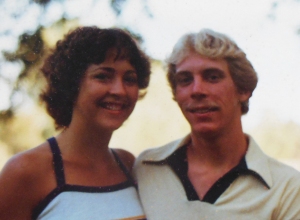 This was a few months after the scandalous wrestling match…we were still smiling.

We became best friends. Two years and nine months after the blind date, we married. Thirty years of wedded bliss.

Not a day passes when I don’t count my blessings.

Tim is at the top of the list. I can’t even begin to express the wonder of being married to my best friend. He holds my heart.