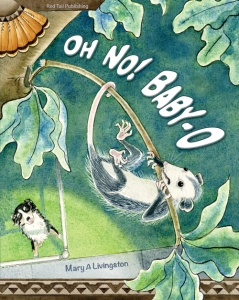 Oh No! Baby-O
When a dog frightens mama opossum, Baby-O flings from her mama’s back and begins an exciting adventure.

Our local wildlife rescue organization, Shasta Wildlife Rescue and Rehabilitation (SWRR), holds an Annual Open House and Baby Shower event at Anderson River Park, in Anderson, CA. Educational animals will be on hand and there’ll be activities for children. Tim and I will be there as well.

My first introduction to SWRR was over 20 years ago when a turkey vulture fledgling took up residence in our henhouse. A few years later I discovered a mama opossum roadkill with live babies still in her pouch along our little country road. In each instance, SWRR volunteers gathered the young and cared for them until they were able to make it on their own in the wild.

Thus, Oh No! Baby-O was conceived. Oh, No! Baby-O has it’s official release/birthday later this summer (August 2015). But today, there’s a special surprise at the SWRR Open House and Baby Shower. A limited number of advanced copies will go on sale as a fundraiser for SWRR! Isn’t that exciting!

So, if you’re in the area, come on by. Don’t forget your Orphaned Baby Animal Shower gift. Here’s a list.
Why bring a shower gift?
First, this is one of the ways SWRR is supported.
Second, all persons bringing gifts will be entered into a drawing for this piece of original art. 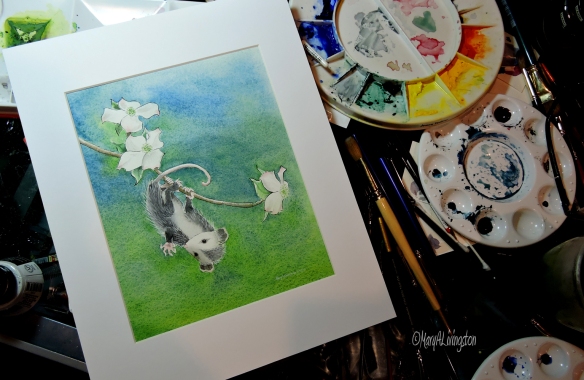 The drawing will be held at 1 p.m.

I hope to see you there!